Performance matters. It can mean the difference between capturing a visitor’s email or – even better – scoring a sale. It’s why we spend so much time optimizing our sites to make them faster.

But I’m not just talking about page speed. There’s a whole other area of performance optimization that doesn’t get as much attention.

I’m talking about perceived performance. It’s a measure of how fast a user thinks your website is, not necessarily how fast your technical stats say it is.

In this post, we’ll explore what perceived performance is, some of the psychology behind how people perceive time, and take a look at some techniques you can use to make your websites feel faster.

Using the techniques in this article, in addition to traditional page speed optimization techniques, should help enhance the overall user experience of your site.

Note: Interested in reading more about page speed? Check out Page Speed and Why I Should Benchmark My WordPress Site.

The Psychology of Time: Perceived vs Actual Loading Time

The time that you measure with a stopwatch is objective time. It’s absolute – developers can measure the page speed of a website and make the necessary adjustments to make it technically faster.

Psychological time, on the other hand, is subjective and potentially malleable. It’s relative, but can be manipulated so that it is perceived to be subjectively faster than it actually is.

Take, for example, elevators. Have you ever wondered why lifts have mirrors? They’re one of the greatest inventions in modern times, allowing people to travel 40 floors without breaking sweat climbing stairs.

But when elevators were first introduced, people stood in them, staring at the door with an exaggerated sense of time because they had nothing else to do (this was back before smartphones were invented!).

All they could think about was their understandable fear of falling 40 floors to their death, with nothing but cables suspending them in mid-air. On top of that, people complained about how slow the elevators were. 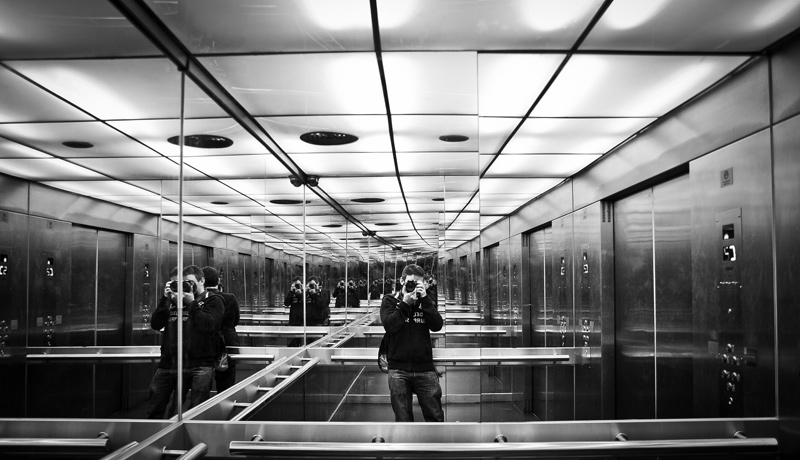 Selfies are an elevator past-time thanks to mirrors. Image: Hernán Piñera.

So elevator companies tried to address the challenge of making lifts faster and safer. At the time it was an expensive thing to do. Until one engineer proposed looking at the problem from another angle: people thought lifts were slow, so instead of concentrating on larger motors and slicker pulley designs, why not focus on the person inside the elevator?

This led to the idea of mirrors in elevators so people would think about something else instead of focusing on time or their preoccupation with falling. Distracted by the mirrors, people fussed over their hair and makeup. On a follow-up survey, people commented on how much faster the “new” elevators were even though the speed was exactly the same.

In a more recent example that further highlights how big problems don’t always require big solutions, Eurostar invested billions of pounds in order to reduce the travel time between London and Paris on its trains by 25 minutes. The thinking was it would please customers.

But in his TED Talk Sweat the small stuff, advertising executive Rory Sutherland points out that it would’ve been wiser to make the journey more pleasant for travelers instead. Eurostar could’ve equipped its trains with wifi for a fraction of the cost, improving the user experience and reducing the perceived travel time. Because travelers who are glued to Facebook, the news or watching a movie would barely notice the reduction in travel time.

Looking at time objectively, there are some speed guidelines that you should keep in mind when optimizing the performance of your site.

In his book Usability Engineering, usability expert Jakob Nielsen identifies three important response time limits for the perception of the reaction time of a website:

Considering Nielsen originally published these time limits in 1993, it’s probably safe to say the upper limit of 10 seconds is now 5 seconds or even less. Since the early 1990s, internet speeds have increased exponentially and users have become accustomed to fast loading websites, so any site that takes longer than 10 seconds to load feels like it’s loading on dial-up.

There is a myriad of ways to optimize the performance of your site so it loads objectively faster (check out Speed Up your Website: Make the First Few Seconds Count). And when it comes to optimizing your site so it loads psychologically faster, there are methods you can employ that can help reduce the perceived loading time of your website so it feels faster than the objective loading time.

Here are some tips to help you add your own version of mirrors to your site so it feels faster for users.

1. Use activity and progress indicators

If you have certain page elements that load slowly on your site or slow operations that impact the user experience, you should consider using an activity indicator like a spinner. Activity indicators reassure visitors that the page is actually working and loading.

Even better, use a progress bar that displays what percentage of the site has already loading. This not only helps reassures restless users, but gives a sense of how much longer they will need to wait.

Where possible, it’s always best to display a progress bar that provides real-time feedback on how much longer the operation will take to finish because the visitor can continue using your website. Unsplash uses a spinner to tell users that photos are still loading – scroll down to check it out in action below.

What a progress bar animation looks like can also affect perceived performance, as this study by researchers from the Human Computer Interaction Institute at Carnegie Mellon University found.

#renio interesting! Facebook did A/B testing to determine that users blamed FB on left, iOS on right, for slowness. pic.twitter.com/zEVbTime1Q

An eye-tracking study by the Nielsen Norman Group found that when the most important content on a website is loaded first, users spend about 20% of their time looking over the content. However, if this area takes 8 seconds to load, users will spend only 1% of his or her time viewing this area.

The basic idea behind lazy loading is that placeholder image is displayed on the page and progressively loads in different stages, from blurred, to pixelated, to sharp. A similar technique can be applied to the actual content on the page.

Unsplash uses lazy loading and an activity indicator to reassure users that images are being load.

Preloading content allows you to prioritize the loading of certain content on the page. Using the preload value of the <link> element’s rel attribute, you can write declarative fetch requests that specify resources that your pages need very soon after loading, and which you want to start preloading early before the browser’s main rendering machinery begins.

This ensures that these resources are made available earlier and are less likely to block the page’s first render, which in turn provides performance improvements.

5. Predict the user’s next action

Now we’re getting into crystal ball stuff that is actually within the realm of possibility. While predicting what the user might do next on a page might appear tricky at first, if you have a site where users tend to perform the same workflow over and over (i.e. click on navigation links, click certain buttons) then it’s not all that difficult to predict what they will do next.

So make the most of this knowledge and preload the most popular content in the background so if the user does, in fact, choose the action you predicted, the content will be already displayed, ready for interaction.

Unfortunately, there’s no easy speed testing tool you can use to measure perceived performance, though metrics like first contentful/meaningful paint can hint at it.

One way you can effectively measure it, however, is to survey your visitors and ask them how long it felt like it took for your page to load.

If you do this, make sure your survey sample is large enough to collect a more precise average of the perceived loading time of your site.

With this information on hand, you can then make further improvements to your site’s user experience and perceived speed.

It’s easy to get caught up in page load speed and optimizing resources to make your site lightning fast. But at the end of the day, improving the perceived performance of your site can have a huge impact on the user experience of your site.

Users don’t like waiting. By making changes to how your site loads and prioritizing the loading of certain content, you can influence how users perceive the performance of your site so they believe loading times are shorter than they really are.

Found this a great read. I really liked the elevator comparison as I think a lot of people would relate to that and how long some elevators take to get to the destination!

Thank you for these recommendations. What is the best way to preload a page (that you mentioned in item 5 above)?

I find the perceived vs. actual psychology topic fascinating! The elevator example was perfect and I learned something new.

The world is getting faster and websites shouldn't be an exception. Web hosting plays a big role in site speed as well. Having a reputable, fast web host can help increase the overall speed of the website.