It is with great joy and emotion that we celebrate the second birthday of WP Rocket. 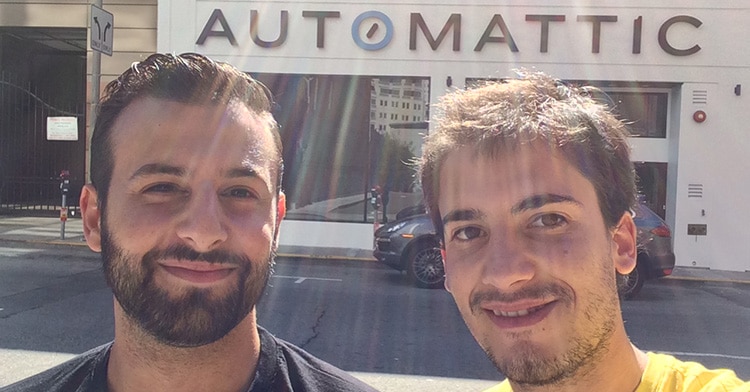 Jonathan and Jean-Baptiste in front of Automattic office

In September 2014, Jonathan and Jean-Baptiste (two of the co-founders and developers of WP Rocket) began a 3 month stay in San Francisco to discover the startup ecosystem in Silicon Valley. They participated in several meetups at Google, Twitter and of course SF WordCamp.
This transformative journey was extremely fulfilling, instructive and motivating.

Being immersed in this very inspiring place was a real game-changer for our mindset, and how we think about our company.

As a result of this trip, we’ve been able to create the foundation of our startup culture. This transformed three guys who were selling a WordPress plugin into a Startup  of 8 people (today) with a strong company culture.

We are inspired by startups like Buffer, Baremetrics and MailPoet (in particular Kim, who advised us a lot, kudos to him).

From these startups, we’ve adopted :

We are not just a “company” anymore but definitively a startup, and we believe that we can make the web a better place.

To infinity and beyond

This trip was the trigger of our pivot : WP Rocket will be one product among others from our startup and not the only one. We want to have a portfolio of products and not depend on only one.

This desire has been manifested with multiple hirings. Lucy and Marko  joined the WP Rocket team on support at the beginning of 2015. This allowed us to have more “free time” to think and work on other projects.

For the past few months, Julio has been working on a security plugin. This is going to be a great challenge for us as we experiment with a freemium model for the first time,  and because there are great competitors in the space, like WordFence and iThemes Security.

Sebastien who arrived in May, is working with Jean-Baptiste on Imagify, an image compression toolkit. This will be our first SaaS which will be a great learning experience.

Geoffrey, who arrived in May,and Matthieu, who joined us in June, are working on a WordPress theme shop. We want to take on that huge challenge which will be very different compared to selling a plugin.

To work in a mostly remote team can create a lack of human connection. That’s why we’ve decided to organize a ‘startup retreat’ every year .

A startup retreat is a great occasion to be working all together from a wonderful place and having a great time.

For this first time, we did it in June 2015 in Spain. We were all together in a lovely house in the south of Seville to work and enjoy barbecue, appetizers and the swimming pool.

This was a great human experience and it was a good opportunity to get to know each other better.

We’ve decided to be fully transparent and we explained the process in the blog post : Transparency Matters!
The result of this new policy was very positive on several different points :

We are super happy to see that some WordPress business are sharing their revenues as well (e.g. Themeisle, Ultimate Members)

Last year, we announced our desire to move our support forum to a HelpDesk. We’ve been using HelpScout for almost one year, and we are very happy customers.

We’ve greatly improved our documentation which has significantly deceased the number of support tickets.  We are always working on new content for the documentation, and are planning to translate it in France, German, Italian in upcoming months.

To get as much feedback as possible it’s very important to talk to customers. We didn’t have any tools for that until November.

Now we are using Intercom which is perfect for that. For instance,  we are getting a lot of feedback to update our public roadmap.

We’re going to write some dedicated blog posts about that.

Since the first version of WP Rocket, we’ve paid attention to all the feedback we get from our customers.

Whether it’s about new features or bugs to fix,  every piece of feedback is important. Thanks to your feedback we’ve been able to improve the plugin a lot.

Update Cycle Inspired by WordPress itself

Since the beginning, we’ve been following the same update cycle as WordPress with two version types : major and minor.
For a major version, the version number is X.X, for example 2.6. Those versions have necessary new features, but also include improvements and fix bugs.

At the beginning our development strategy was to get as much info as possible to create a huge major version.
On average, a new update had 8 new features and bug fixes.

At the time we were thinking that having a huge new version could be a sales point to sell WP Rocket.

But we were wrong to follow this update cycle which had many faults. The most important was  bugs between new features.

Since 2.3, we’ve decided to follow a new strategy inspired by Lean Startup. This allows us to be much more efficient with small improvements.

For a major update we’ve limited the number of new features to 3. This limits conflicts between the new features themselves and means that we can fix bugs.
By limiting new features, finding the origin of a bug and fixing it becomes much easier.

For a minor update, when we have 2 support tickets with the same issue, we stop our current development to fix it. If the bug prevents WP Rocket from working correctly, we deploy a new version with the fix.

Since we’ve used this method, the number of new tickets and the number of bugs following a new major release have been reduced significantly!

Since 2.2, it’s possible to be a beta tester. To do that, simply enable the “Beta” option in the tools tab of WP Rocket.

Every new major update has a 2 week beta test. 8% of our customers are beta testers, so that’s about 2000 websites.

These tests are very important for a plugin like ours. This allows us to have a lot of feedback regarding the new features and conflicts which can appear regarding server configurations.

In February, we made our development roadmap available to the public.

We have been inspired by iThemes Security. For our public roadmap we are using Trello which is a participative tool. This allows anyone to vote for features to be integrated into WP Rocket.

Since 2.5 most of the new features have come from customers’ feature requests.

For more information about that, you can read our roadmap blog post.

A great result for this second year

Today, 4 people are working full time at WP Rocket, which is double compared to last year.

We are currently looking for a 5th person. For more information you can have a look at our job offer : Customer Support at WP Rocket (European Timezone) 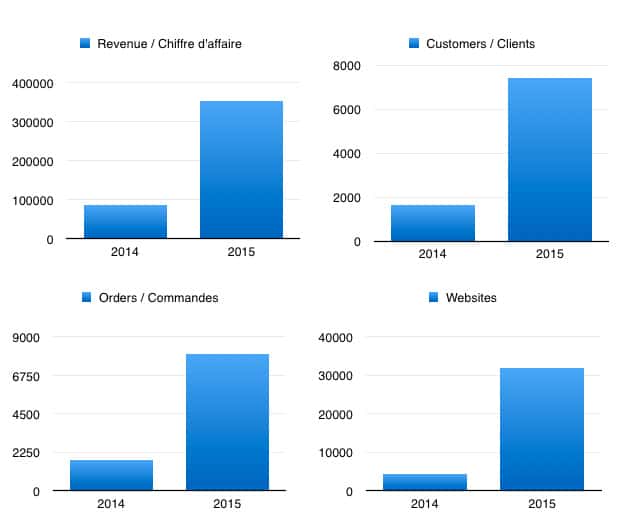 A few days ago we started using statbot.io which provides us stats from Intercom. This tool gives us detailed information on our new users.

We are concluding this post, by saying a big “thank you” to all our customers, people who trust us, and all the team.

We never thought we would arrive at this point. Above all, it’s been an awesome human journey.

Co-Founder and CEO of WP Media

Congratulations guys, love to work with your stuff and can't wait for Julio's security plugin as well. Keep up the good work, and, being in a pretty young company myself I regard the way you're handling things as a good example on how it should be done. Cheers!

Thank you very much :)
Cheers

Wishing you a Happy Birthday with gratitude. You're doing a good job.

Congrats guys, I've only just become a customer but you've shot up in my estimations with your attitude. Don't change #raisondetre

@Dave Glad to hear that!

Congratulations at hard earned and rightfully won success! Here's to many more years to come.

Inspiring ! It's nice to see this project growing again and again.

Great. Awesome News.
WP Rocket is part of my WordPress development.
I am happy using WP Rocket and referring to my friends too.
Keep up the good work.

@Åke: Thanks and good luck with StatBot!

@Lara @Julien @Robin: Thanks a million!

Congrats :) Keep up the good work.