This is our monthly report where we share our business insights as part of our transparency policy.

In February we shipped 2 new versions which fixed several bugs.

We’ve published our development roadmap which is now public.  It’s had lots of great feedback which is very encouraging 🙂

We will ship version 2.5 of WP Rocket very soon.

As you can see, we had a better month regarding revenue but with less orders and the same number of new customers. That means that we sold more business and pro licenses (directly or through upgrades).

However our renewal orders were much worse compared to January. Renewals are one of the most important metrics for us : it really shows customer loyalty.

This decrease can be explained by two reasons :

The number of tickets was pretty stable but we’ve improved again our first response time from 3h33 to 2h56!

We’ve increased the first response time, mostly thanks to a lot of predefined “Saved-Replies”, in our ticketing system. 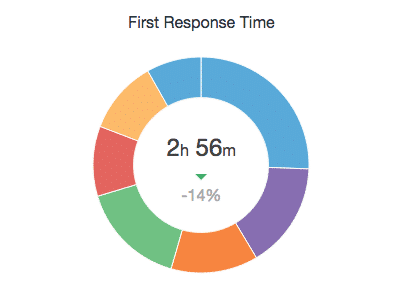 26% of the tickets were answered in less than 15 minutes.

Our happiness score from the support has been good with a 85%, but a little less compared to last month (-10%).

We are now a team of 6! Marko and Sebastien have just joined us in March.

Marko joined us as a Happiness Rocketeer. He will help us to be even better on our customer support.

Besides, it will allow Jonathan and Jean-Baptiste who were doing mostly customer support to focus on new projects to come (yes this is a tease).

Sebastien has joined us as a Developer. He will first work on the LazyLoad script, and then on new projects to come (yet another tease).

We are very happy to welcome them, and very excited to work with these two awesome people.

Lesson of the Month: Learning From Mistakes

We had some “not good ratings” this month on our support.
One was because we sent a wrong documentation link, and the issue got worse.

Co-Founder and CEO of WP Media

Excellent transparency guys - if only all businesses we as clear and honest as you guys. Keep it up!

very good for you and for as, mi sites are faster now

It's pretty amazing how transparent you guys are. But I got a question, how do you feel sharing all this information, mainly the financial one, to the public?

I mean, is it only for marketing purpose?! To show transparency?! What about the company instead of growing up, was going down?! Would it change?

Thanks a lot for the information! =)

Hi, thank you for your feedback :)
Why not sharing the financial informations?

It's not a marketing move at all. Transparency is an important value for us and transparency shouldn't stop at financial informations. Buffer is sharing their revenue in real time : https://buffer.baremetrics.io/

And yes we will continue of course if company is going down ;)

@Renato, I second Jean-Baptiste. The sharing of financial information is actually quite the vogue thing to do these days. Lots of orgs beyond Buffer are doing this. Take a look at Microconference and the business related presentations from WordSesh and Pressnomics for example.

One thing that would be great and perhaps more novel would be an introduction story of WP Rocket rise. That is, the story of how they actually got to the point of getting this user base for renewals and the seemingly steady stream new users without a core presence in the WP.org plugin directory. It would be a treasure for up and coming WP devs.

I became one of your customers in February and I couldn't be happier. I needed a bit of help and Jean-Baptiste answered quickly. I really like doing business with a company like yours. Nice work!

Yep you're totally right. And we are going to publish some posts about our different strategies, which will be much more valuable -I agree, to WP devs, compared to numbers.

However this kind of posts, requires times to be written :)

Jean your effort of transparent business is much appreciated. I'd like to invite you to a WordPress Business group to share with us more insights and let's help each other to grow. Here is the link https://www.facebook.com/groups/wp.business.group/

@Eman and @Jean-Baptiste, thanks for the response. I'm not used to this kind of approach. I've thought about it a few times and I'm not sure why it seems a great concept when looking you guys and other companies doing, but when thinking about doing in my own company, I'm not sure why the scary thought/feeling.

Either way, I'm glad you're doing this, I'm learning a lot about! =)

Thanks for a great plugin! It was very easy to install. My questions were promptly answered by your tech support. Appreciate your transparency, too. Wish you the best!

I'm very impressive with this transparency inside within the company. With my experience working with the MNC company i'm never seen this information put into public view. Really amazing, because you guys have the proper action plan to fix the mistake that been done before. Good job again for the Team.